day 3! the day i ate the most. we really crammed it in.

first off is breakfast obviously. OBVIOUSLY.

we went to Paradox. we were more reasonable than the day before. we split 2 breakfasts 2 ways. we got a basic breakfasty thing with biscuits and gravy hashbrowns, tempeh bacon and sausage. the gravy was great but the biscuits were slightly better the day before. the tempeh bacon was great. then we got a benedict style concoction on sourdough with broccoli and lots of vegetables (because we needed them badly) and a hollandaise that was sooo goood. 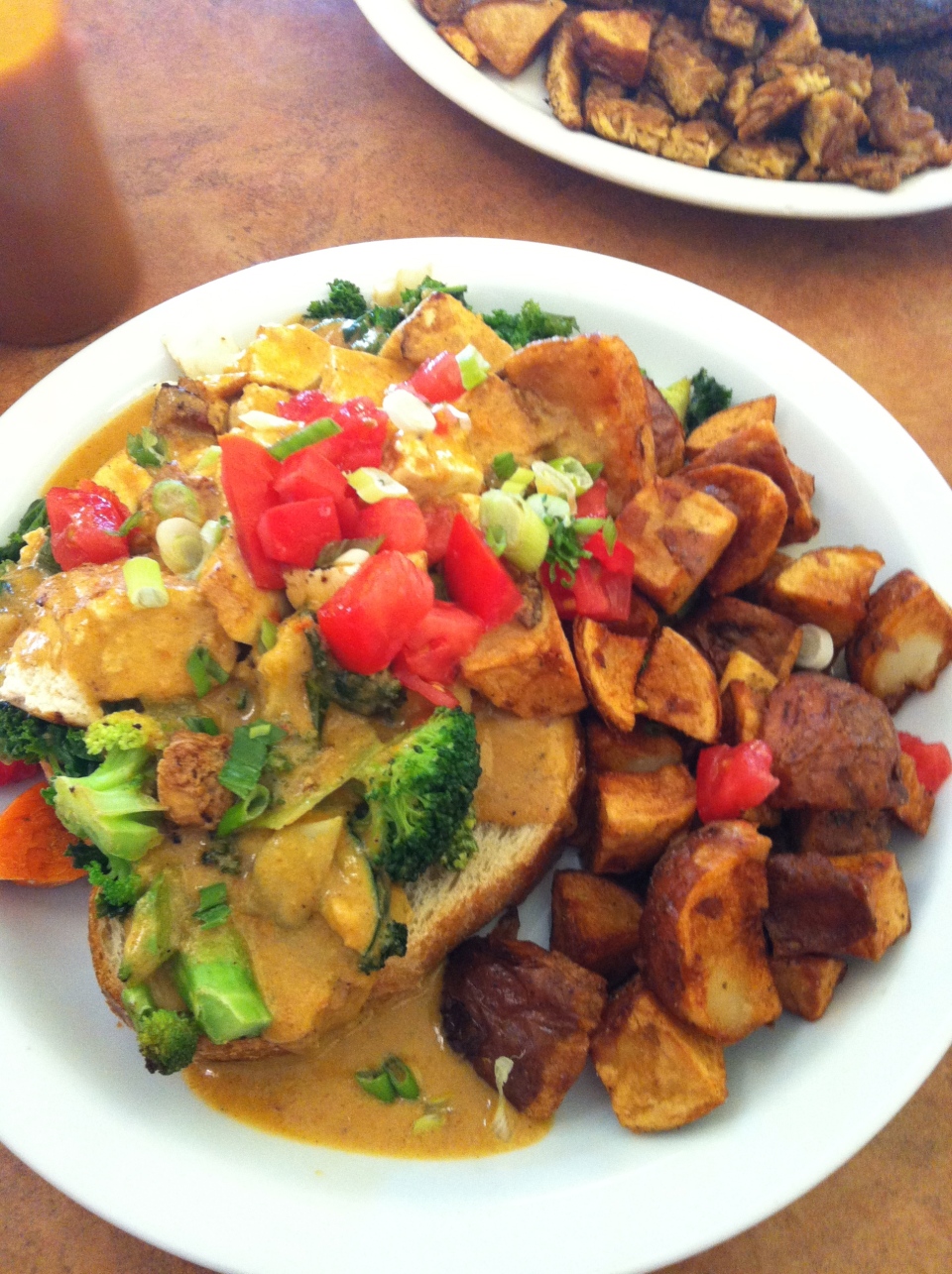 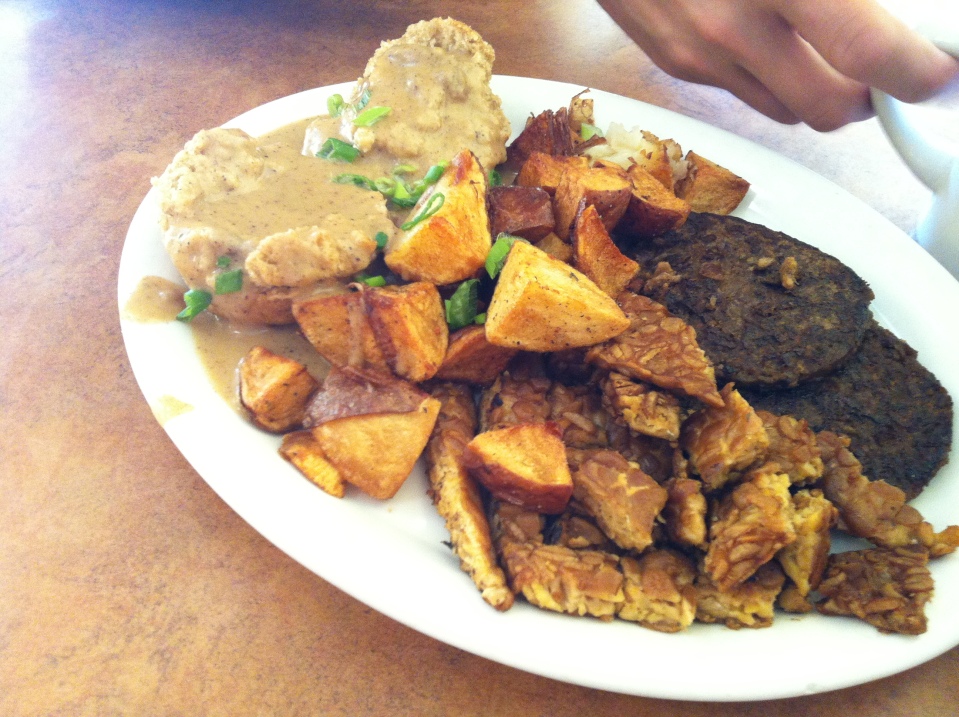 then we went to Exiled records for shopping time then brews at the bar next to it. here is a picture of mark’s eyebrows drinking a beer. 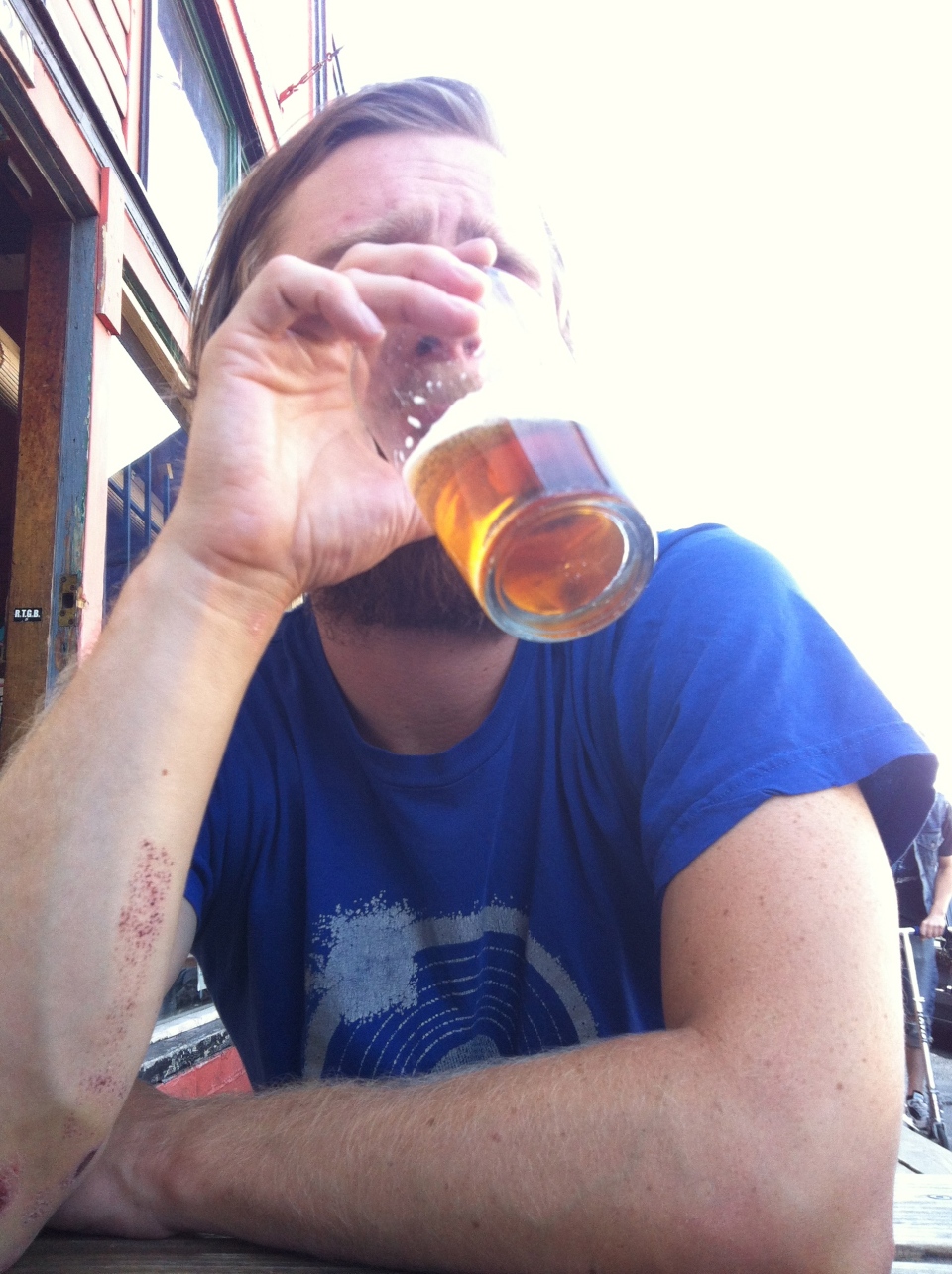 there were these weird berry/flower things on the ground everywhere and they are beautiful! does anyone know what they are? 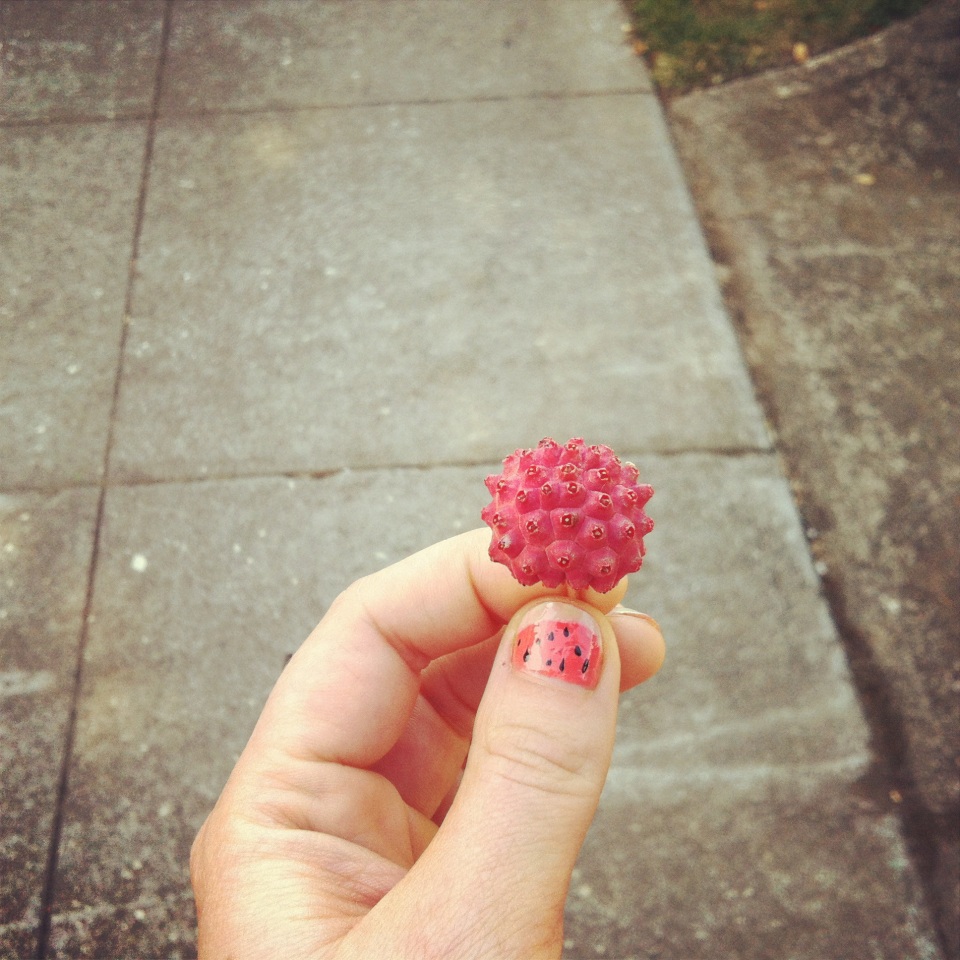 then after some solid wandering we headed up to Sweet Hereafter (a vegan bar run by the same people as Bye and Bye) for lunch and beers in time for happy hour. i had an ESB that was REALLY really tasty, i don’t remember who it was brewed by. i believe the other was a hef or maybe some special summer ale and it was refreshing and great. 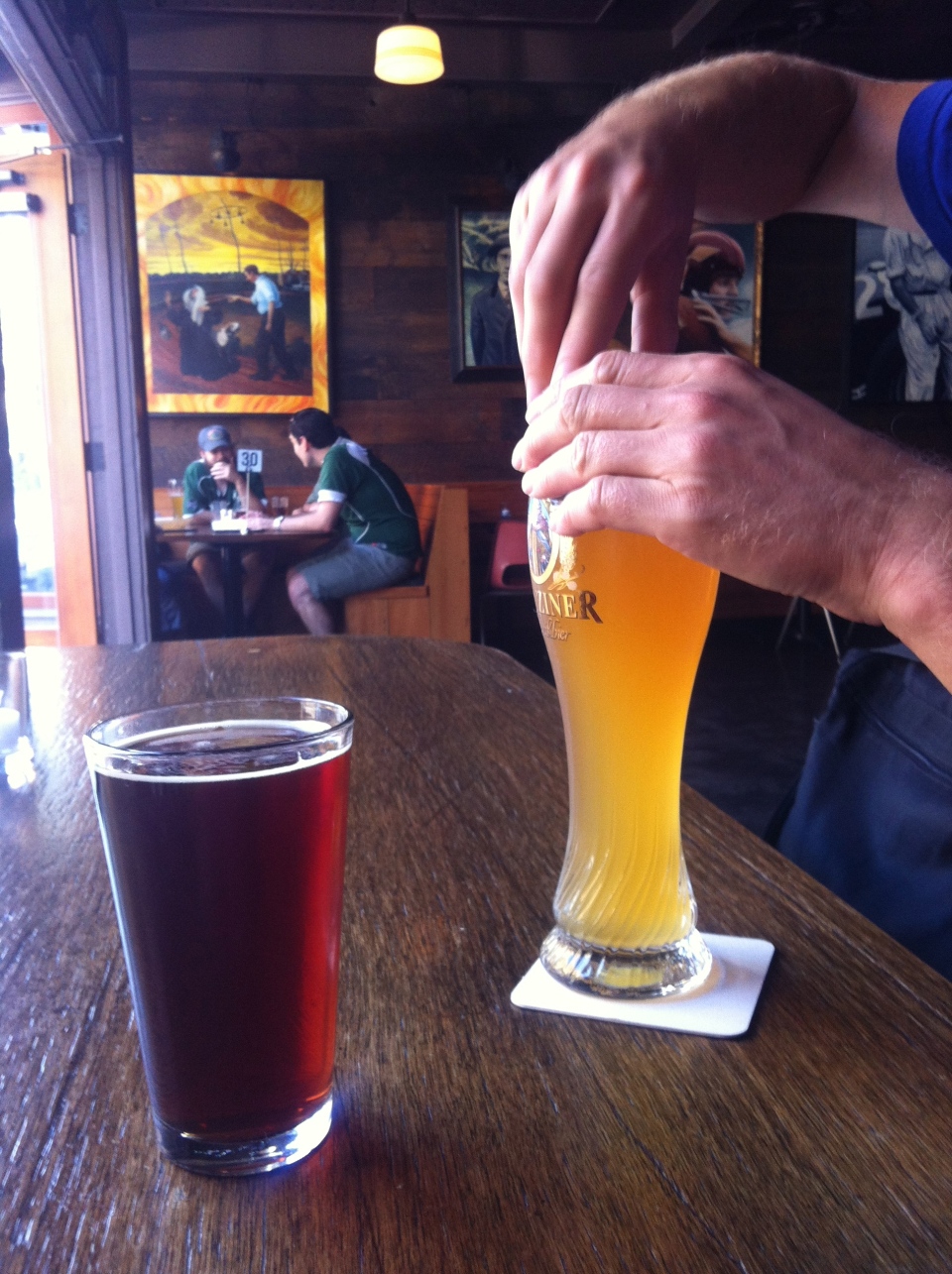 we had a buffalo sub made with soycurls and HOLY SHIT IT IS SO GOOD. we also shared a jerk bowl: brown rice, jerk tofu, coconut kale, beans, avocado and a side of broccoli so we don’t die. this was also super super good and probably without it i would have felt like garbage.

we sat in the window and hung out here for quite a well, drinking beer and watching this huge bear dog outside, who i eventually had to hang out with him. he was a real dreamboat. 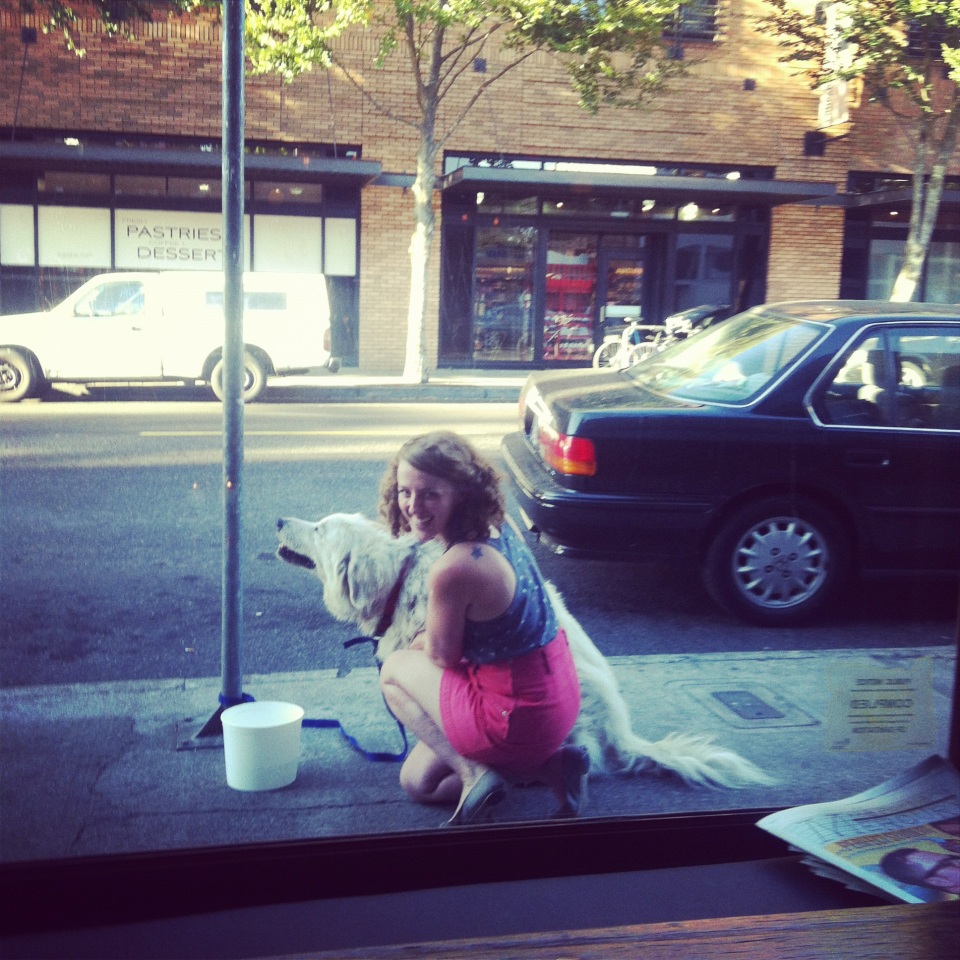 then since we were too full to eat more we kept drinking. we wandered over to a bar that i think was called Bare Bones, they had picnic tables and an extended happy hour so we stopped in.

the gentleman had a miller high life (the can is reason enough) and i had a watermelon fizz because i love watermelon and i love gin and i love american pours. this thing was more than half hooch. it was great.

more wandering, more sweating. did i mention it was stinking hot out this whole trip and we walked everywhere? i was into it, don’t get me wrong, but the heat and all the food/drinks can really tire you out.

we crammed in one last meal for the day back at hungry tiger because it was nearby and tasty. two bites in i realized i couldn’t eat any more food or i would throw up but i tired really hard. i didn’t make much of  dent in this meal. we got a burger with pickles and cheesey sauce and tempeh bacon and the bits i ate were good. we also got a scramble AGAIN because we are insane and it was really good but again, i was actually going to explode.

we were also drinking more beer, i had a hefeweizen.

then a walk across the bridge back to where we were staying. our bellies were insane and huge so we put them to bed. and so ends day 3.